Previously, for the 1st task in The Eudyptula Challenge, we built a Loadable Kernel Module (LKM) that adds "Hello World" to our kernel's message buffer any time the module is installed. You can read my notes all about that here if you want to learn more.

Or, if you wish to work on The Eudyptula Challenge yourself before you read my notes (recommended), you can use my git repository, which has all 20 tasks and the code I used to complete each one.

Now that you have written your first kernel module, it's time to take off the training wheels and move on to building a custom kernel. No more distro kernels for you, for this task you must run your own kernel. And use git! Exciting isn't it! No, oh, ok...

The tasks for this round is:

After doing this, don't throw away that kernel and git tree and configuration file. You'll be using it for later tasks, a working kernel configuration file is a precious thing, all kernel developers have one they have grown and tended to over the years. This is the start of a long journey with yours, don't discard it like was a broken umbrella, it deserves better than that.

Just like mechanics, plumbers, and all the other skilled trades, having the right tools for the job makes a world of difference. This "tools maketh man" proverb rings true even for software developers, even though most of our tools are less tangible.

The tools I needed to build version 5.8 of the kernel on my (charmingly retro) Lenovo T430, running Ubuntu's 18.04 LTS (Bionic Beaver) release, are easily installed with:

When you first navigate to the kernel's git repositories, you will be greeted with hundreds of projects all having something to do with archiving or improving the Linux Kernel in some way. To help simplify the process of finding Linus' repository, which has the latest patches, we can search through the projects listed (using Ctrl+F) for "torvalds/".

If you still have problems finding Linus' repository, you can cheat with this URL.

Once you have found the URL, we can use git to download a copy of Linus' Linux repository using the typical git clone command. If you are unsure about how to clone a repository, the git documentation has a great article about getting started with git.

The Linux Project is big (~3GB). If you have a slower internet connection, you can add --depth=256 to the git clone command above to create a "shallow clone" which limits the number of older patches you need to download and still have a functioning copy of the kernel's source code.

With a copy of the kernel's source code in hand, our next task is to set the many thousands of configuration options needed for the Kbuild System to properly compile our kernel. Each configuration option, like the CONFIG_LOCALVERSION_AUTO the Little Penguin mentioned in the challenge message above, informs the Kbuild System of the drivers and features needed to be installed to function properly with our computer's hardware.

However, instead of setting roughly 8700 config options by hand, one-at-a-time (a very error prone, time consuming process), we can copy the configuration file from the linux distribution currently running on our computer as a sort of starting point.

The first step in copying our distribution's configuration file is to find it in our /boot directory.

To copy your distribution's config file into the root directory of the kernel use the this command:

Next, answer yes to any new configuration options added between the release of our distribution's kernel (they usually lag behind a few versions) and the bleeding edge we've downloaded from Linus.

Combined, these commands are equivalent to make localyesconfig found in the kernel documentation. I find it nice to see "how the sausage is made" though.

While not technically needed to complete this eudyptula challenge, this is a good place to talk about how we can customize our newly copied configuration file for our kernels. While there are a few, largely similar, commands that help us edit the .config file, the command I prefer is a ncurses based menu that can run on most systems or on remote servers if wanted.

It produces a color menu, full of radio-lists and dialogues, that looks something like this: 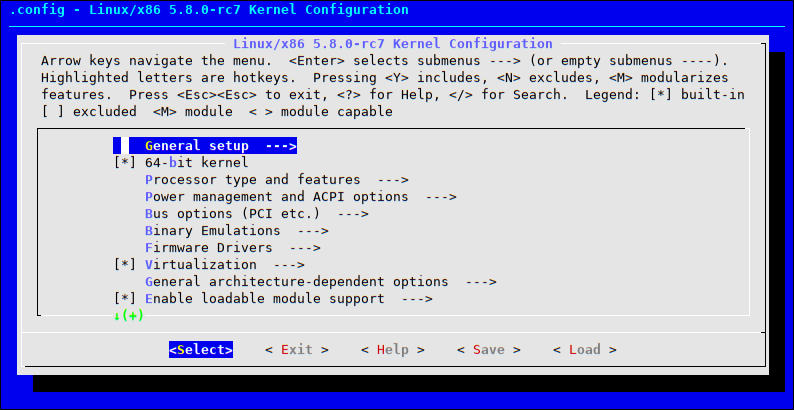 Each menu option allows us to enable and disable certain features in our kernels, along with anything that depended on that option. For example, if we disabled Networking, all network-related options, like Amateur Radio, will also be disabled.

It is easy to remove an option from our kernel that will ultimately leave us with a broken kernel. When in doubt, leave the option enabled unless you know what you are removing.

The full list of commands used to edit the kernel's configuration file is available to you in the kernel documentation, if you want to learn more. They largely use different GUIs to edit our .config file.

With all the preparations complete, we can start to work on compiling the kernel into a compressed image ready for our computers. Just like in userspace applications, a simple make command is all that is needed to build our kernel:

Building the kernel will take a significant amount of time.

While a bare make command, without the added arguments, will also work to build our kernel, however, the kernel is such a large project, using the -j flag to compile multiple files at the same time will dramatically reduce the total time needed to compile.

getconf _NPROCESSORS_ONLN determines the number of CPU cores your computer has. You can replace this with any number you wish. For example make -j4 will allow make to compile 4 targets at a time, consuming 4 of your CPU's cores. You can read more about how Parallel Execution works in the make documentation.

We are also passing two extra configuration options with the make command above:

Both of these configuration options will add information to our kernel's version string, helping us prove to The Little Penguin we installed the latest kernel published by Linus Torvalds.

Our last and final step to completing this challenge is to install the kernel along with its supporting modules into our /boot and /lib/modules folders. This will allow our boot loader, GRUB, to properly initialize our freshly compiled linux kernel the next time we reboot.

Each distribution of linux installs the kernel in their way. For example Arch Linux's documentation tells us to manually copy (with cp) and not to use make install to install the kernel in our /boot directory. All this to say "your mileage may vary".

For most linux distributions we can install our kernel with a simple make command:

Along with installing all the kernel's modules and the kernel itself, this command will also update our /boot/grub/grub.conf files, so we don't have to manually update GRUB ourselves.

If your linux distribution has trouble with the make install commands above, an alternative is to bundle our linux kernel into a package. This method is slower (a real pain when developing drivers) however, packages usually have more success installing on certain systems.

There are so many linux distributions I cannot possibly test them all. For my hardware running Ubuntu 18.04 LTS, the following commands worked.

For Debian and Ubuntu based distributions we can use deb-pkg to generate the packages:

This command will generate up to 5 Debian packages:

All of these packages can easily be installed with a simple dpkg command:

And that's it! Reboot you computer, and run uname -r and you should see something like:

This output will prove to The Little Penguin you've successfully compiled and installed your first (of many I'm sure) custom linux kernel. Great Job!