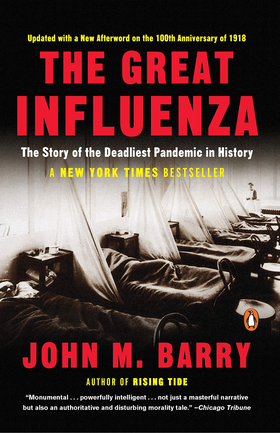 When living in New Orleans (Louisiana) one of the many "iconic" things visiting guests would request to see (before pandemics existed of course) was the above ground cemeteries. I was regularly surprised during each visit by both how heavily touristed New Orleans' cemeteries are, and how much death the 1918 influenza season brought to the city.

New Orleans' hot and humid swamps had always brought disease to the historically significant port city. In 1853 alone an estimated 8,000 people died from Yellow Fever. And while 8,000 is a shockingly high number, there is something different to seeing the aisles of 3,489 vaults (roughly 1% of New Orleans' population in 1918) for the people who died from influenza. It's much like the real life version of "what if all C@\/!$-19 deaths happened in your neighborhood".

That experience together with reading John M. Barry's book The Great Influenza it's easy to see how humbling a pandemic can be. Even today, without a vaccine available, the best advice doctors can give is little more than wear a mask and avoid other people, the same advice given by doctors in 1918. It would take scientists another 15 years, until 1933 to discover that influenza was caused by a virus rather than a bacterium they has believed during the 1918 pandemic. Today, even with the amazing advances with mRNA, and the many other tools 100 years of research has given us, science is still much slower than we wish.

Though, after reading the book that inspired George W. Bush and his Health Secretary, Mike Leavitt, to work on and publish a multi-billion dollar pandemic-preparation bill, giving us a playbook on how to navigate today's pandemic, it's clear how capable we are when we collectively focus on a goal (and history).

Doctors, as Barry describes, who where just recently expected to have what we today would think of as a traditional medical school education, thanks to the amazing work of schools like Johns Hopkins University, and The Rockefeller University founded decades before the pandemic in 1918, showed up day after day and helped the millions of people too sick to feed themselves all while making huge leaps in scientific discovery, that would lay the groundwork for what we rely on during the current pandemic and expect in modern medical universities.

It was truly amazing (in a morbid way) to read the parallels between the 1918 influenza season play out in the book while watching the news today. And it was amazing to see how determined the first responders of the "lost generation" reacted to major cities all but consumed by the overwhelming death brought by influenza. One nurse was quoted in the book as saying:

She remembered that at the peak of the epidemic the nurses wrapped more than one living patient in winding sheets and put toe tags on the boys’ left big toe. It saved time, and the nurses were utterly exhausted. The toe tags were shipping tags, listing the sailor’s name, rank, and hometown. She remembered bodies “stacked in the morgue from floor to ceiling like cord wood.” In her nightmares she wondered “what it would feel like to be that boy who was at the bottom of the pile" ...

Only to witness people today say almost the same thing about our current pandemic.

At first I was a little uneasy starting this book in the middle of a pandemic and presidential election. I thought that the parallels in the news of relearning what we already knew 100 years ago would be too depressing for me to read. And while I learned a great deal about the beginning of "modern medical schools", the "Captain America" levels of bravery and sacrifice fighting a world war during the deadliest influenza season in history, the greatest take-a-way I had from this read was how capable we humans are when we put our minds to a goal, both good and bad.