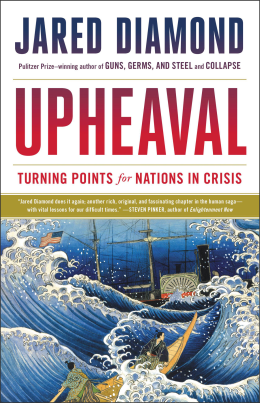 Jared Diamond is one of those prolific authors with so much clout to his name that when he writes a new book, everyone knows about it. That's why when he published his new book called Upheaval all of the algorithms I trust easily shoved this straight to the top of my "recommended reading" list and they had good reason.

This book, inspired by his wife, Marie Cohn who works as a psychologist, uses crisis therapy techniques developed to help people through periods of crisis in their own lives (like the death of a loved one) and adapts them to gain understanding of how nations going through crisis can successfully navigate that critical time.

Diamond begins the first part of the book by taking the 12 things therapists have identified as steps that indicate whether someone will succeed in resolving a personal crisis (like acknowledging you're in a crisis), and adapts them into 12 success factors to apply to the case studies of countries going through a crisis at different times in history.

While all the case studies were interesting, my favorite case study (largely because I knew so little about the situation) was how Finland, which shares a 1,000 mile border with the Soviet Union, was able to successfully bridge the desires of Stalin, who at the time was invading all his neighboring countries, (Finland was the only Soviet neighboring country not occupied by the USSR) and the Allied Powers who largely abandoned Finland during the war.

After Finland refused Joseph Stalin's demands on November 30, 1939, the Soviets invaded and kicked off what would eventually become known as the Winter War that officially lasted until March 13, 1940 and unofficially continued throughout all of World War II. 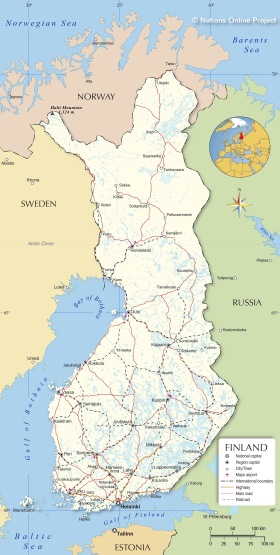 The Finnish volunteers used creative tactics to fight the Soviets, taking advantage of the Finn's small population and their knowledge of the terrain, ensuring the Soviets would have to pay a high price to capture Finland (8 Soviets per Finn killed).

However, the size of the Soviet army meant that defeat was still a very real possibility and Finland would need outside help defending itself. So the Finns asked for help from the Allied Powers, and controversially, after the Allies refused (they were busy fighting Nazi Germany) they asked for and received help from Nazi Germany.

Finland would eventually find that Nazi Germany wasn't an ally they wanted and began to realize their main problem was something totally out of their control, their geography, (one of the success factors). So they began to refuse support to the Nazis (possibly the turning point in the Battle of Leningrad) and started to evaluate their situation.

The Soviet army was so large in comparison to Finland's that if the Soviets really wanted to control Finland, they could. And although Finland to this day remains a very proud nation, it is also realistic. Instead of ignoring the Soviets (like they've been doing up to World War II) they began negotiating with them, and persuaded the Soviets that they would gain nothing by occupying Finland.

Amazingly, this approach allowed Finland to maintain its independence, and eventually became an important source of western technology to the Soviets during the Cold War (making Finland a powerful friend to the Soviets and ensuring Finland's independence). However, true to all compromises, it also came with drawbacks.

On top of having to drive crappy Soviet cars during the Cold War, Finnish newspapers were expected to censor themselves from reporting on Soviet abuses (a large compromise for a liberal democratic nation like Finland) in order to keep from offending Soviet sensibilities.

During the Cold War, western diplomats would coin the term "Finlandization" to mean weaker countries (Finland) pandering to stronger ones (USSR), but Diamond reminds us that these diplomats were from countries that don't share the same geography as Finland and never offered help when Finland was desperately trying to remain independent during the Soviet invasion in World War II.

In the last sections of the book, Diamond switches from looking at historical examples of nations in crises, and begins focusing on the current and future crisis we're dealing with, everything from climate change to political polarization, and applies the 12 success factors so that we might come out better at the end (much like Finland was able to after World War II),